If I step back in my mind’s eye and look at what we’re doing, it doesn’t make any sense. Then again, flipping through scripture reveals that being used by God often takes on a form that makes no sense to men. Ezekiel lays on his side for for over a year and eats food cooked over dung, Jesus smears mud on a man’s face, and if I went on, the list of strange behavior in the bible would take too much space for this format. We’ve been standing with “LIFE” written on red tape and placed on our mouths since May of 2013 in front of a courthouse. The strategy laid out by heaven may draw the consternation of men, but I care not. I am resolved to employ the plan of God and ride with Him to victory.

“For What” you may ask, “are we seeking victory? And why a courthouse?”. In May of 2013, Arkansas and North Dakota passed laws restricting abortion at 12 and 6 weeks respectively. These are the most restrictive laws on abortion in our nation and a direct frontal attack to Roe v Wade. The ban in North Dakota would put a stop to 90% of the abortions in that state. As always in these situations, the legal battles over these laws commenced. These are likely the most significant cases on abortion in the 42 years since Roe v Wade, and we knew that St. Louis would once again be integral in determining if an entire people group will be recognized as human.

The Eight Circuit Court in St. Louis sits one step below the supreme court and our court system was the starting point of the Dredd Scott case which made it’s way to the US Supreme Court. This case tragically decided that black people were less than human. Judge Harry Blackmun was promoted from the 8th Circuit to the US Supreme Court where he authored Roe v Wade, deciding that the pre-born are less than human.

Our stand in prayer was labeled “The Gaddite Stand” after the warrior tribe of Gad who in Numbers 32 agreed to fight for the inheritance of the other tribes before receiving their own inheritance. We would war in prayer and prepare the ground for these cases to arrive in St. Louis on behalf of Arkansas and North Dakota, believing that our own inheritance of LIFE giving laws would be released in Missouri. A small band of prayer warriors stood regularly through wind, heat, soaking rain, snow, and pleasant sunny days. In August of 2014 several people were given words independently indicating that the ground of the courthouse on which we had been standing had been given to us, that the court belonged to us. With increased expectation of what God was doing we pressed in prayer, anticipating the arrival of the cases.

In December 2014 we received word that the cases would finally be heard in St. Louis on the 13th of January, 2015. Praying that day, I could feel the satisfaction of the Lord, that we had been faithful with the Gaddite Stand. In conversation with some of the lawyers in the cases, it became apparent how important our prayers had been through the process. The attorney defending the Arkansas law relayed how he was the only pro-life attorney in the office under a pro-choice attorney general and had to prepare for this case alone. He told how miraculous it was that the attorney general even allowed the law to be challenged up to the 8th circuit court. We spent time in prayer during this season in early 2014 praying for that attorney general by name.

Our assignment is not over. It has been a pleasure to partner with the Lord in prayer and see how our prayers were used to shape history, but these cases are not finished. The three judges (Benton, Shepherd, & Smith) are deliberating their decision now and we expect a decision to be released sometime in the next six months. We must continue to pray for them as they consider these cases.  As strange as we may look at times when we follow the Lord’s direction, it is going to be worth it all! 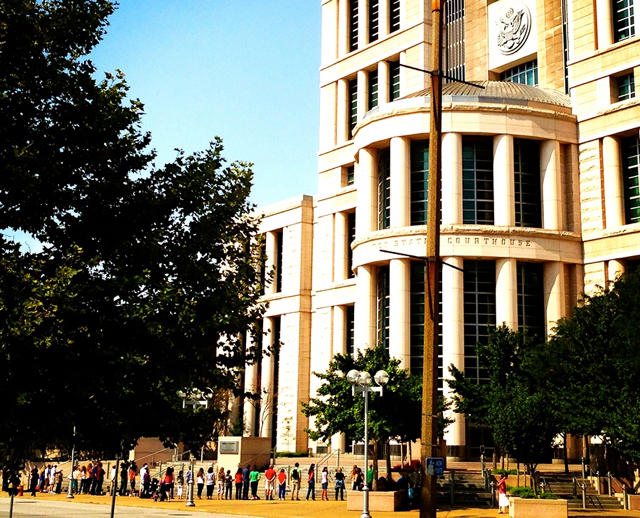 In case you haven’t noticed, the ground is shaking here in St. Louis. The time for intercessors to arise in our region is NOW. The time for the warring tribe of Gad to take their place on the front lines has arrived.

More than once in our region’s history we’ve avoided the difficult battles. In 1820 while trying to maintain a “balance” the Missouri Compromise was minted. At a Jordan River moment in our nation’s history, we looked and saw that the giants were too frightening to battle with. Again in the 1960’s, while most other major metropolitan areas had race riots, St. Louis was one of only a handful that had none. After wandering a while longer, we find ourselves again facing a Jordan River crossing in history and we must fearlessly face down the giants of the land. We are presented once again in our region an opportunity to fight for justice, what will we do?

In Numbers 32 the leaders of the tribe of Gad and Ruben have a meeting with Moses and ask him to allow them to have the land on the near side of the Jordan River. Moses, remembering the last time they were ready to cross the Jordan 40 years prior, and not wanting to wander in the wilderness for another 40 years confronts them saying in verses 7-9:

“Now why will you discourage the heard of the children of Israel from going over in the land which the Lord has given them? Thus your fathers did when I sent them away from Kadesh Barnea to see the land. For when they went up to the Valley of Eshcol and saw the land, they discouraged the heart of the children of Israel, so that they did not go into the land which the Lord had given them.” (NKJV)

Recognizing their previous cowardice and lack of faith in the promises of the Lord, the two tribes vow to lead the charge in battle and fight on the front lines for the land designated for the other tribes before returning to receive their own land inheritance, saying in verses 17-18:

“but we ourselves will be armed, ready to go before the children of Israel until we have brought them to their place; and our little ones will dwell in the fortified cities because of the inhabitants of the land. We will not return to our homes until every one of the children of Israel has received his inheritance.”

After conquering the Promised Land, the tribe of Gad became well known as a tribe of fearless warriors.

On January 13 the cases for Arkansas’ 12 week abortion ban and North Dakota’s 6 week abortion ban will be before the Eight Circuit Court here in St. Louis. Some legal experts have labeled these as the most significant cases on abortion since Roe v Wade itself. So here we are again at the banks of the Jordan River, are we willing to war in prayer for justice to be established in our nation or will we declare the “the timing isn’t right”, or “the Supreme Court isn’t stacked right”, or other giants are just too formidable? It is the time for the tribe of Gad to arise and fight. We will war in prayer for the inheritance of our sister states Arkansas and North Dakota on the front lines at the eighth circuit court here in St. Louis.

We will be holding a Silent Siege from 9:00 AM to 11:00 AM on January 13 outside of the Eighth Circuit Court building at 111 10th St. while the cases are heard inside. We are asking all who can join us, to come join our Gaddite Stand as we fight for the inheritance of our sister states.